Sept. 25—Breitbart editor Steve Bannon may have inadvertently done American politics a favor on Sept. 10, when he answered a question on trade policy by 60 Minutes host Charlie Rose by citing the “American System” of economics. The debate about Bannon’s assertions has so far stayed alive, with articles addressing the subject published Sept. 21 in the Washington Examiner and the Wall Street Journal.

What’s missing, however, from Bannon and his critics, is some actual clarity on the subject, which happens to stand at the heart of the policy issues which will determine the future of the United States.

America’s built on our sys—on our citizens. Look at the 19th century. What built America’s called the American system, from Hamilton to Polk to Henry Clay to Lincoln to the Roosevelts. A system of protection of our manufacturing, financial system that lends to manufacturers, OK, and the control of our borders. Economic nationalism is what this country was built on. The American system. Right? We go back to that. We look after our own. We look after our citizen, we look after our manufacturing base, and guess what? This country’s gonna be greater, more united, more powerful than it’s ever been. 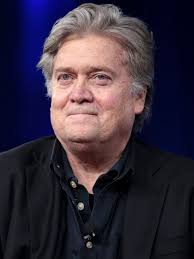 What one can conclude from this statement is, minimally, that Bannon’s understanding of the American System is seriously flawed. As has been pointed out by numerous commentators since, President Polk’s administration proceeded from the polar opposite point of view to that of Henry Clay and Abraham Lincoln. One need only look at the Mexican-American War, Polk’s major claim to fame, which Lincoln famously opposed as based on an outrageous fraud.

Then there’s Bannon’s portrayal of the American System as anti-immigrant, which others have been quick to point out is an outright lie. Hamilton, Clay, and Lincoln all either fought anti-immigrant policies, or advocated increased immigration as a boon to building the nation.

Bannon’s viewpoint can be accurately be compared to that of the 1850’s American Party, better known as the Know Nothings, whose touchstone was virulent opposition to rights for immigrants, particularly Catholics. Some histories show that this party—in Massachusetts, for instance—combined its anti-immigrant stance with promotion of American System-like policies of regulation of industry, expansion of public education, and other pro-working-class measures. Like the Whigs, however, the party splintered on the issue of slavery, and disappeared.

Abraham Lincoln’s assessment of the Know Nothings, as expressed in an 1855 letter to his friend Joshua Speed, is to the point:

I am not a Know-Nothing. That is certain. How could I be? How can any one who abhors the oppression of negroes, be in favor of degrading classes of white people? Our progress in degeneracy appears to me to be pretty rapid. As a nation, we begin by declaring that “all men are created equal.” We now practically read it “all men are created equal, except negroes.” When the Know-Nothings get control, it will read “all men are created equal, except negroes, and foreigners, and catholics.” When it comes to this I should prefer emigrating to some country where they make no pretence of loving liberty-to Russia, for instance, where despotism can be taken pure, and without the base alloy of hypocrisy.

More knotty is the issue of protection of manufacturing. Bannon is correct that the American System advocates of the 19th century championed the protective tariff as a major means of advancing U.S. manufacturing and the interests of the working man. This idea is anathema to the dominant economists of both the right and the left today, and both have rushed to counter Bannon for attacking free trade.

But protectionism per se is not the point—it’s the American System as a totality. That system was not defined by particular economic measures such as tariffs. To the contrary. What lies at the core of the American System of Economic is a commitment to advance the general welfare and progress of the nation through “energetic” government actions to promote the productive powers of labor. This means an active government role, dirigism, in ensuring credit for industry and agriculture (a “national bank” or its equivalent), providing ever-improving infrastructure (“internal improvements”), and constantly raising the standard of living of all the people.

The best example was the economic program of Abraham Lincoln, as devised by his chief economist Henry Carey. Lincoln explicitly saw himself the champion of the working man, and his policies aggressively advanced his welfare. There was the greenback system of national credit; the funding of land grant colleges to advance science in agriculture and what was then called mechanics; the transcontinental railroad; the Homestead Act; and yes, the tariff. And all these policies proceeded even as Lincoln had to devote his major attention to winning the Civil War.

You can call Lincoln’s policy economic nationalism, as Bannon does, because it does proceed from a commitment to national sovereignty. But that term does not capture the core commitment to human cooperation and progress—domestically and internationally–which the American System represents. And it clashes sharply with Bannon’s otherwise strident demands for the deconstruction of the Federal government, and denigration of whole classes of human beings.

I attempted to capture the key features of the American System historically, and in principle, in the profiles of its Founders, which you can find on this blog.

Today, the revival of the American System requires the immediate re-institution of Glass-Steagall banking separation, the establishment of a new credit institution for long-term capital investment in infrastructure, and government investment in a major science-driver program, such as the space program and nuclear fusion energy. These policies are rooted in the American System of economics properly understood.

So let’s have a debate on economic policy that features the real American System.