Aug. 6, 2018—Six years after Hurricane Sandy, the Army Corps of Engineers has begun to present options for protecting the New York-New Jersey harbor area from future devastating storms. At stake is the fate of 16 million people living in the area; three airports; five major rail networks; the largest port on the East Coast; and numerous other strategic infrastructure installations.

The most dramatic proposal is the construction of five-mile-long sea wall across the harbor, complete with gates for allowing ships to enter as required. This type of barrier protection has been put in place in 18 other harbors in the world, including in the Netherlands, St. Petersburg, Russia, and New Orleans. These engineering masterpieces have worked well to protect these major cities. The Army Corps’ presentation packet can be accessed here. 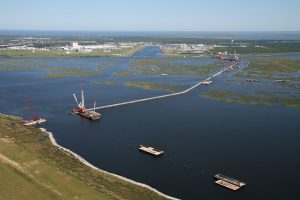 Objections to the project come from the usual suspects in the environmentalist community, who are gearing up their opposition. The final Army Corps recommendation is not scheduled to be issued until at least 2021.

While the environmentalist objections can, in principle, be answered by scientific argument (and the experience of the other projects), the more likely stumbling block will be the price tag of the project, now estimated to be between $20 and $25 billion dollars. Congress’s failure to move ahead with a major infrastructure program means that funds are unlikely to be available, unless new proposals are put on the table.

The most appropriate proposal is for the creation of a National Bank for Infrastructure and Manufacturing, a plan for which is currently circulating on Capitol Hill. Utilizing some of the trillions of dollars in U.S. government debt as capital, such a bank can easily launch such major life-saving projects, simultaneously creating millions of high-paying jobs and a boost of productivity in the economy as a whole.