Apollo 11: Can We Recapture Its Spirit Today?

By the Light of the Silvery Moon: A Century of Lunar Photographs 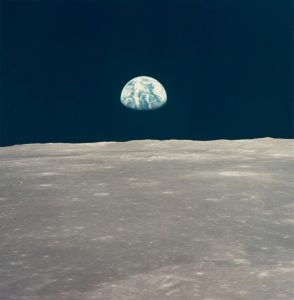 Earthrise across the Moon’s Mare Smythii, taken from lunar orbit by astronaut William Anders on December 24, 1968, during the Apollo 8 mission.

July 15, 2019–The National Gallery of Art is offering a small, but fascinating exhibition titled, “By the Light of the Silvery Moon: A Century of Lunar Photographs” (July 14, 2019-January 5, 2020) in celebration of the 50th anniversary of Apollo 11, the NASA program that successfully landed humans on the Moon, and returned them safely to Earth, in July 1969.

The exhibition is part of an exploration of “The Human Journey”—a collaboration among the Kennedy Center, the National Geographic Society, and the National Gallery. It includes a number of early lunar photographs, including late-1850s glass stereographs; 1865 albumen prints; plates from the Atlas photographique de la lune published beginning in 1896; and a series of photogravures from Carte photographique et systématique de la lune (1914), which attempted to systematically map the entire visible lunar surface.

An unusual character of the exhibition is its dual focus on photography of the Moon, going back to its formative years in the 1850s, and the triumph of the first manned Moon landing more than 100 years later. These photographic images provided information about the lunar surface to NASA in advance of its Moon missions, and then, photos taken by early Apollo missions, and those taken on and from the lunar surface, including live video, were eagerly followed by people all over the world.

The mission also produced a treasure trove of information on the nature of the Moon itself, some of which is still being analyzed today. One element of the exhibit allows visitors to see in 3D a composite of photographs taken by a camera placed face-down on the Moon’s surface by the astronauts. The high-resolution, reticulated image gives a stunning sense of “you are there,” as well as indicating the rich layering which they found. There is no visual image which can be reproduced to convey this; you have to see it for yourself.

As the Gallery notes in its press release:

From the moment photography was introduced to the world in 1839, photographers began dreaming of documenting the Moon’s remote mystery. Initial experiments wrestled with the challenge of taking pictures of a distant, moving object in a nocturnal sky. By the 1850s, the first detailed photographs of the lunar landscape were achieved. Later in the century, astronomers employed photography to systematically map the entire visible lunar surface with greater accuracy than could be drawn by hand.

This early stereoscopic image dates from 1858-1859 (the eve of the election of Abraham Lincoln and the outbreak of the Civil War). Special glasses allow visitors to see a three-dimensional image of the Moon.

NASA’s investigations to determine which was the best place to land Apollo 11, led to the voyages of several unmanned spacecraft, the American Ranger, Surveyor, and Lunar Orbiter, which traveled to the Moon and transmitted images, including of the Moon’s far side, never before seen from Earth. Each of these provided vital information to NASA in its planning for the Moon landings. 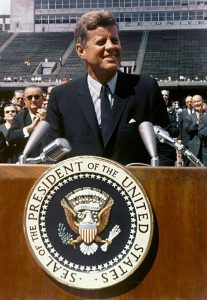 JFK at his speech at Rice University.

One hundred years after the first photographic images, President John F. Kennedy asked Congress to appropriate funds for a Moon landing before the end of the decade. In a speech on Sept. 12, 1962 at Rice University, he outlined the purpose of the mission as he saw it:

We set sail on this new sea because there is new knowledge to be gained, and new rights to be won, and they must be won and used for the progress of all people. For space science, like nuclear science and all technology, has no conscience of its own. Whether it will become a force for good or ill depends on man, and only if the United States occupies a position of pre-eminence can we help decide whether this new ocean will be a sea of peace or a new terrifying theater of war….

There is no strife, no prejudice, no national conflict in outer space as yet. Its hazards are hostile to us all. Its conquest deserves the best of all mankind, and its opportunity for peaceful cooperation many never come again. But why, some say, the moon? Why choose this as our goal? And they may well ask why climb the highest mountain? Why, 35 years ago, fly the Atlantic?… 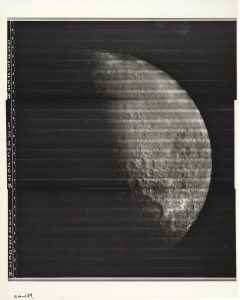 This photograph is from the final two Lunar Orbiter missions, which produced surveys of the Moon’s surface, which were transmitted back to Earth, one strip at a time, to create a comprehensive lunar atlas. Launched on May 4, 1967, the Lunar Orbiter IV studied the Moon’s gravitational field, measured micro-meteoroid activity, and conducted radiation experiments. The project’s last mission, Lunar Orbiter V, began on August 1, 1967. It recorded potential Apollo and Surveyor landing sites. 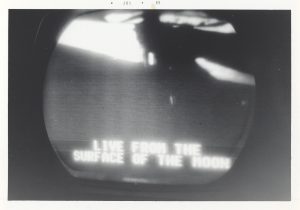 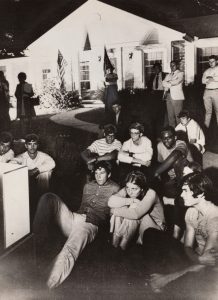 Spectators watch television coverage on the lawn at the home of Stephen and Viola Armstrong, Neil’s parents, July 20, 1969.

Photographs and film, which reached more than 500 million people on Earth, through the live television broadcast, had a dramatic and optimism-producing impact on people all over the world. 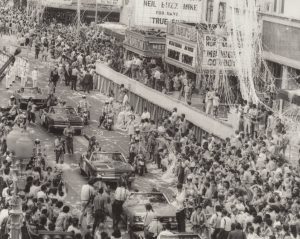 Apollo 11 captured attention worldwide, and press photographs of the mission and its aftermath were widely distributed. Here, following the astronauts’ 21-day quarantine, the city of Houston celebrated its hometown heroes with a ticker-tape parade

What Have We Learned? 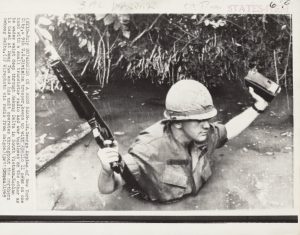 U.S. Division trooper Lt. George Kaplan of New York City wades waist-deep in the Mekong Delta in South Vietnam. In one upraised hand he holds a weapon of war; in the other, a transistor  radio. He is listening to the NASA space flight center in Houston as it broadcasts live, minute-by-minute reports from the American astronauts who have just landed on the Moon, July 20, 1969. 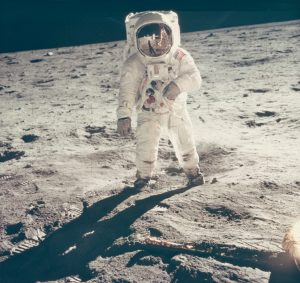 The now-iconic image of Buzz Aldrin, standing on the surface of the Moon, taken by fellow astronaut Neil Armstrong, whose image and that of the lunar lander is reflected in Aldrin’s mask, July 20, 1969.

The juxtaposition of these two images, taken on the same day, some 240,000 miles apart, powerfully illustrates the lost promise of that moment in time. The magnificent potential of space exploration, which inspired at least one generation of young people to pursue careers in astronomy, astronautics, and other scientific fields, has faded away like so much confetti raining down on the joyful parades that greeted the astronauts on their return. At the same time, the U.S. involvement in Vietnam continued for more than two more years, until April 1975; its aftermath is still being felt in the unjust wars carried out by the United States around the world.

It is poignant to note that the last manned Moon landing, Apollo 17, in December 1972, signaled the beginning of the rapid deconstruction of America’s space program. Today, U.S. astronauts must travel to the International Space Station on a Russian Soyuz vehicle. (There is a certain irony in this, given that a significant part of the impulse to launch a crash program to get to the Moon, was the determination to beat the Soviets!)

Our abandonment of manned space flight has cast a long shadow: Instead of moving forward to establish scientific colonies on the Moon, and then, sending manned missions to Mars, we have lost that sense of adventure that President Kennedy inspired the nation to adopt: “We set sail on this new sea because there is new knowledge to be gained, and new rights to be won, and they must be won and used for the progress of all people.”

Let us hope that the worldwide commemorations of Apollo 11, when mankind accomplished miracles, will reignite the determination—and the joy—that characterized our space-faring era.