December 17, 2020–As Christmas 2020 approaches, images of the same time period in 1932 come to mind: unemployment lines, swamped food banks, eviction notices, and more.  The images are only overshadowed by the staggering number of deaths and other effects of the current deadly pandemic.  While the acute suffering of Americans increases, politics in the Nation’s capital has virtually come to a standstill.  As a result, despair hangs heavy over the good ole U.S.A. 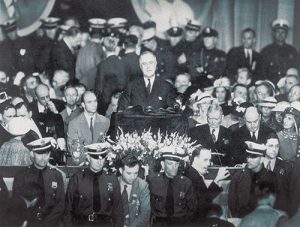 Franklin Delano Roosevelt  at the National Democratic Convention at Philadelphia in 1936, where he spoke of our rendezvous with destiny.

The election of 1932 that ushered in Franklin D. Roosevelt for President, offered the country the prospect for change.  Although there was no guarantee of success, the fate of the nation laid in the hands of a few men and women of good will.  On the eve of Christmas 2020, and moving into the New Year, let’s hope that our nation’s fate lies in the hands of such like-minded leaders.  But first, let’s take a peek under the Christmas tree.

Officially, the real unemployment rate[1] in the United States stands at approximately 12%, with little prospects for improvement, and ominous indications of getting much, much worse with huge layoffs, especially in state and local governments.

CNBC pointed out on December 10 that the nation faces a deadly confluence of trends: rising unemployment claims, slowing job growth, and the impending expiration of many life-saving programs for the unemployed. I quote:

Together, initial claims are at their highest point since mid-September.

The article then reported that job growth in November had “slowed to its lowest level since May.  There are about 4.2 million more unemployed workers than job openings, according to an analysis of federal data issued Wednesday.” 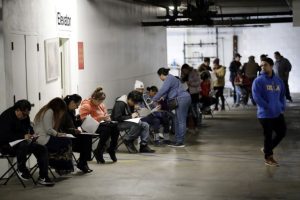 A California unemployment office is overflowing.

On December 14, the New York Times reported on the prospects more than 12 million people face once they lose their jobs, especially when current Federal safety nets run out on December 26.

Unemployed workers’ spending on food, clothes and other so-called nondurable goods immediately drops 12 percent, about twice as much as when they lost their job and went on unemployment insurance, University of Chicago researchers have found. Spending at drugstores falls 15 percent. Co-payments for visits to the doctor fall 14 percent. Spending on groceries falls 16 percent, or $46.30 a month, on average.

Millions of Americans are less than two weeks from cutbacks like those. The last two federal emergency unemployment programs in the CARES Act, passed as the pandemic’s first wave surged in March, expire on Dec. 26.

An analysis by the Century Foundation concluded that 12 million workers who rely on one or the other of these programs will lose them on that day. This will add to 4.4 million who will have already exhausted their federal unemployment benefits.

It projected that fewer than three million of these workers will be eligible for what are known as extended benefits, which kick in when the unemployment rate in a state is exceptionally high and can last six to 20 weeks, depending on the state.”

One of the major disasters looming due to Federal inaction is a possible eviction tsunami, due to job loss, cuts in unemployment insurance, and the end of the CDC’s moratorium on evictions on Dec. 31.

The Times  article cited above reported that “nearly 12 million households fear they may not being able to meet their mortgage payments, according to a survey in October by Moody’s Analytics and Morning Consult. Millions of others can no longer afford their rent. And 37 percent of the unemployed said the coronavirus pandemic prevented them from looking for a job.” 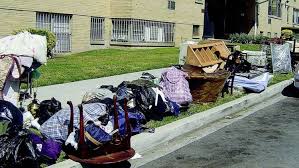 Possessions of an evicted tenant in D.C.

On December 12 The Hill reported on the CDC’s moratorium on evictions. The CDC issued a nationwide moratorium on eviction of renters back in September in the interest of public health. Renters were eligible to claim relief if they met certain conditions, including declaring that they couldn’t pay because of COVID-19 hardships, and affirming that they were likely to become homeless if evicted. According to The Hill,

With new research demonstrating that evictions increase COVID-19 spread and mortality rates, the CDC’s moratorium that prevents some evictions is literally a lifesaver. But it is not enough. While Congress must extend the moratorium past its Dec. 31 expiration date (as well as remove the moratorium’s crippling limits) and allocate billions of dollars to rental assistance, there is a third essential leg of the crisis aversion stool: a right to counsel for tenants facing eviction. Without it, millions of families could still lose their homes during the pandemic, because having a right to stay in one’s home is different from having the ability to exercise that right.

Housing is undeniably a basic human need, and those who lose their homes often also lose employment, health, and child custody. Eviction is sometimes called a “scarlet E” because having one on your record can make finding safe and decent housing virtually impossible. People who become homeless are often jailed and need medical care due to the health implications of living on the street. And as mentioned before, an eviction during the pandemic increases the possibility of sickness and death. COVID-19 has put upwards of 40 million people – a third of all renters in the country – at risk of eviction and all of these consequences.

A December 15 Politico article detailed how the expiration of the eviction ban will disproportionately affect Blacks and Latinos, just as has the virus itself. It wrote:

Black and Latino people are twice as likely to rent as white people, so a wave of evictions would hit them hardest, adding to the unequal toll of a pandemic that is already ravaging the health and finances of minority communities.

“The majority of the up to 17 million households at risk of losing their homes this winter are comprised of people of color,” said Diane Yentel, president and CEO of the National Low Income Housing Coalition.

“While the current crises have heightened the threat of eviction for Black and Latino renters, it is not new,” Yentel added. “Structural racism leaves people of color disproportionately low-income, rent-burdened, or homeless. These inequities compound the harm done by Covid-19.” 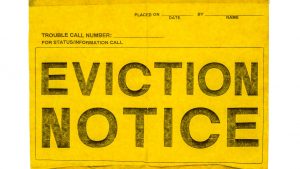 Just as communities of color have seen higher infection and death rates from the virus, they have also been more vulnerable to job and income losses from the ensuing economic crisis, in large part because Black and Latino workers are over-represented in the service industries wiped out by shutdowns. …

Meanwhile, the nation is experiencing a dramatic growth in food insecurity, leading to miles-long lines at food pantries in cities throughout the country.

Last year, more than 35 million people experienced food insecurity. But because of the pandemic, that number could be as high as 50 million for this year, according to the hunger relief organization Feeding America.

And with multiple federal aid programs set to run out soon, many pantries fear they will run out of food, too.

“Since the pandemic started, an average of 60% more people have been seeking help from the organization’s network of 200 food banks, Leone says, with one in two children facing hunger in some counties.

“We think that about four in 10 of the people we’re serving now are new to needing charitable assistance,” Leone says. 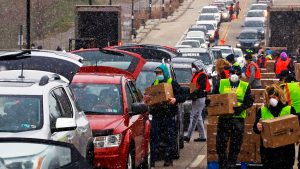 Boxes of food are distributed by the Greater Pittsburgh Community Food Bank, at a drive thru distribution  in downtown Pittsburgh.

A November 24 article in National Geographic pointed to another dimension, the disproportionate impact of food shortages on Blacks and Latinos.

“This is a story about racial and ethnic disparities—both food insecurity and the story of coronavirus,” says Emily Engelhard, managing director of Feeding America’s research unit. “The most acute needs are in areas where the majority of residents are Black or Native American. Of the top 25 counties with the highest projected food insecurity rates, only four—all in Kentucky—are majority white.”

As horrifying as this Christmas scene is, it still doesn’t capture the magnitude of the crisis.  Over the last 10 months, more than 300,000 Americans have died from COVID, which, according to the Journal of the American Medical Association, is once again the leading cause of death in the United States. Its scourge is coupled with a surge of deaths from the concurrent epidemic from opioid and drug overdoses.

As the bodies pile up, gridlock in Washington prevails.  This is untenable and must end.  A short-term stimulus package is desperately needed, and Congress has reached some kind of agreement, but it’s the long-term investment in infrastructure that will ultimately change the downward trajectory.  Our people need jobs rebuilding the country with new technologies, and a vision for a prosperous future for all.

How long must people wait? Santa did not come on Christmas 1932, but he did arrive soon after, in March of 1933, when FDR was inaugurated into office. Roosevelt’s intention on how to address the crisis was immediately made clear. There are many examples to cite during the four terms that FDR served as President, but, given the conditions of life that many Americans face today, and that January 6, 1941 is the 80th anniversary of his “Four Freedoms” speech, I would like to start there. 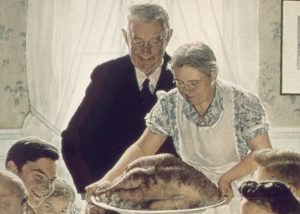 Among FDR’s Four Freedoms was Freedom from Want.  In FDR’s own words, which he scribbled into a notebook, “The third is freedom from want—which translates into international terms, means economic understandings which will secure to every nation everywhere a healthy peace time life for its inhabitants.”

At this Christmas season, thinking like FDR may be a godsend, and would prepare us for the coming New Year.

Two weeks after the election of November 3, 2020, President-elect Joe Biden held an economic summit via teleconference with business and union leaders. During the summit, he expressed some of his economic plans for a $2 trillion “Build Back Better” proposal.

“We can also modernize infrastructure, roads, bridges, ports. 1.5 million new affordable housing units,” he said. “High-speed broadband, we talked about, for every American household, which is more important than ever for remote learning, remote working, telemedicine in the 21st century. Building a digital infrastructure to help businesses, health-care workers, first responders and students.”

This is a direction that the population would support. In February 2020, prior to COVID, 68 percent of Americans supported an increase in federal spending on infrastructure, according to The Pew Charitable Trust’s poll.

A bill currently in the U.S. Congress, HR 6422 calls for the kind of major investment into infrastructure that the country needs.  Upwards of $4 trillion is required to build us out of this treacherous hole, and it can only be financed with a National Infrastructure Bank.  It’s how FDR financed the New Deal, and it is the only vehicle that can move the country immediately in the first 100 days of the new administration.  All it requires is thinking like Americans again.

When Roosevelt accepted the Democratic nomination for President in 1936, he spoke of his responsibility to the nation as a whole, not to a party, but to all of America.  He summed up this responsibility in a manner which is as profound today as it was then.

For this Christmas, and beyond, let us pledge to address our nation’s rendezvous with destiny so that this crippling affliction will never happen to us again.

[1] The official rate is denominated u-6 by the Department of Labor, and includes discouraged workers, the underemployed, and others marginally attached to the workforce, in addition to the official count of unemployed, now cited at 6.9%. An even larger problem is reflected in the low labor participation rate (approximately 61%).