Part 2 of Funding Infrastructure the American System Way. Part 1 can be found here .

March 15, 2021–Anyone looking seriously at how to fund a comprehensive infrastructure plan for the United States must take an in-depth look at America’s 1820’s infrastructure boom. In the period between 1824 and 1829, the outgoing Monroe administration and the John Quincy Adams administration invested more than $2.3 million dollars for the development of canals, roads, and harbors which would transform the productivity of the U.S. economy.[1] That figure was more than double that spent in all the previous administrations combined, and would amount to almost $45 million today. In addition, these two presidents utilized a Board of Internal Improvements to work with the Army Corps of Engineers to survey and supervise the construction of these works.

The United States began to be transformed in precisely the way that American System founder Alexander Hamilton envisioned decades before. 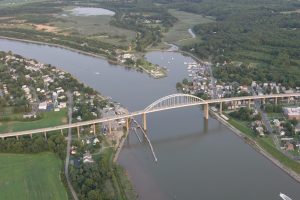 The Chesapeake and Delaware Canal today. It was the first canal to get funding from the Bank of the United States.

The fact that this momentum was sabotaged under the Jackson administration was a national tragedy, which put us on the path to the Civil War, and whose results we are still suffering today. But the history of the Federal government’s actions in that decade are there to inspire us in our efforts to put our country on the right course today. Here is a brief summary of how that was accomplished.

The General Survey Act of 1824 was passed and signed by President Monroe in April of that year, following a critical Supreme Court decision confirming the Federal government’s authority over interstate commerce, including navigation and transportation. Monroe’s signature represented a shift from his previous Jeffersonian view that while the Federal government could draw up plans for infrastructure, it could not spend funds for construction.

The Act authorized the President to commission surveys for routes for roads and canals “of national importance, in a commercial or military point of view, or necessary for the transportation of public mail.” The surveys were to be supervised by a Board of Internal Improvements, which was headed by an officer from the Army Corps of Engineers, which was to carry out the surveys. Congress appropriated $30,000 for the surveying to begin. The general point should be clear: infrastructure development was an integral part of national defense, conceived broadly as providing for the general welfare of the population. (A lesson that should have been driven home emphatically during our unpreparedness for the current pandemic)

The Board produced a report on possible canal links between the Potomac and the Ohio, Lake Erie and the Ohio, the Allegheny and Schuylkill Rivers, and many more. According to the historian of the Corps of Engineers, “this was the only attempt ever made by the Corps of Engineers to view the country as a whole and to adopt a policy of internal improvements, or river and harbor improvements, in accordance with that view.” 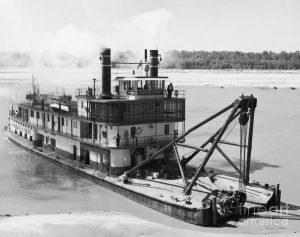 No more than a month later, Congress appropriated $75,000 for removing obstacles to navigation on the Ohio and Mississippi rivers. That direction was expanded in 1826 by legislation which authorized the President to commission surveys to clean out and deepen selected waterways, and to fund the work to carry out those projects.

Unlike Monroe, President John Quincy Adams was not a reluctant supporter of Federal support for building the nation’s infrastructure. An ardent nationalist, Quincy Adams was committed to using government authority to lift up and unite the nation in areas of transportation, science, and commerce.[2]

To carry out his objectives, Adams worked closely not only with Major General Alexander Macomb of the U.S. Army (who had authority over the Army Corps of Engineers), but also with Nicholas Biddle, president of the Bank of the United States. It was under Adams that the Bank was authorized by Congress in 1825 to make its first investment (of $1 million dollars) in national infrastructure, specifically the Delaware and Chesapeake Canal. That was just the beginning, as Congress later permitted the Bank to purchase stock in the Dismal Swamp Canal Company of Virginia and the Chesapeake and Ohio Canal Company, among others. 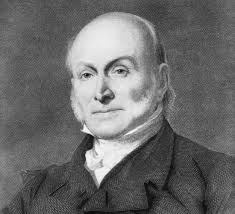 Such purchases amounted to what might be called today a public-private partnership of a certain sort, although, unlike today, it did not promise specific rates of return to the private enterprises (or localities) which were carrying out the projects. Such a kind of government subsidy through purchasing stock was emulated under the Franklin Roosevelt Administration by the Reconstruction Finance Corporation.

Adams also authorized the Army Corps of Engineers to survey routes for the nation’s railroads, a practice which was continued by various presidents, including Abraham Lincoln on the Transcontinental Railroad. Army engineers were even deployed to aid private companies in railway construction, until this practice was stopped by President van Buren.

President Adams himself was terribly disappointed that his efforts at Federal support for infrastructure did not go a lot further, both in binding the country together, and in expanding into the crucial areas of education and science. He went so far as to consider that he had failed at the “great object of my life” and thus, left the country to exist “from hand to mouth,” rather than having the Federal government devote itself to developing the nation’s potential.

Indeed, when President Jackson vetoed the re-charter of the Second Bank of the United States in 1832, Adams, as head of the Congressional Committee on Manufactures, declared presciently that the die had been cast toward the dissolution of the nation through violent upheaval.

The Second Bank of the United States

A discussion of the upsurge in infrastructure spending in the 1820s would not be complete without discussing the role of the Second Bank of the United States, then under the leadership of Nicholas Biddle. Keep in mind that many, if not most, of the projects were initiated by local government bodies or private concerns. But why did they succeed in this period, whereas they had foundered before, and even later? 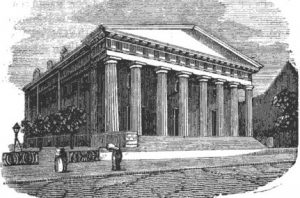 Second Bank of the United States, built on Hamilton’s principles.

The answer lies in the role of the Bank of the United States, a commercial banking institution partially owned by the Federal government, and closely regulated by and coordinated with it. Under Biddle, the Bank, as by far the largest financial institution in the country, played a critical role in regulating credit in the private sector, and in quashing speculation. It therefore created a financial environment in which long-term investment was possible. Its notes created the basis for a stable currency and its management was geared to facilitating commerce and investment.

Biddle enunciated his concept of the role of the BUS in a letter to John Quincy Adams in 1838:

In truth the banks are but the mere agents of [the]community. They have no funds not already lent out to the people, of whose property and industry they are the representatives. They are only other names for the farms, the commerce, the factories, and the internal improvements of the country…

From this standpoint, it is no surprise that the BUS subscribed to all the six major canal companies which were chartered in the 1820s. It was positioned to continue such support for infrastructure expansion when it came under assault by the Jackson administration, an assault which redounded to the aid of the major New York City and London banks the populist president claimed to oppose.

The Niles Weekly Register summarized the role of the Bank thus in an article in 1832:

The bank, because of the facilities which it affords in the exchanges, as well as on account of the uniformity in the currency which it establishes, is now a splendid pillar in the broad “American System;” for a large part – perhaps two-thirds of all its accommodations, in one way or another, are for the direct encouragement and extension of agriculture and the mechanic arts, the promotion of internal improvements, and erection of all sorts of buildings – dwellings and stores, and factories and workshops…

While this has been only a brief summary, some lessons should be evident. The dramatic progress made in building our transportation infrastructure in the 1820s was intimately connected with the active support given to those efforts by the Federal government.  Through the Army Corps of Engineers and the Bank of the United States, resources were directed into surveying and carrying out improvements in water navigation, and eventually railroads, to the effect of vastly cheapening transportation costs for the nation’s producers and consumers. 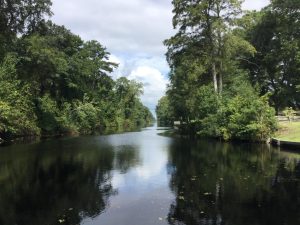 The Dismal Swamp canal in Virginia received investment from the BUS.

A modern version of a National Bank, supported by government credit as was the BUS, could work a similar revolution in infrastructure spending. Like the BUS, it could be a commercial institution, and collaborate with localities and states in the major projects which we so desperately need.  The result would not be short-term profit but a steady increase in the productivity of our economy.

Nancy Spannaus is the author of Hamilton Versus Wall Street, The Core Principles of the American System of Economics, which contains important background relevant to this post. Click here.

[2] For a full elaboration on the “liftoff” of the U.S. economy under the Adams administration, see Chaitkin, Anton, Who We Are, America’s Fight for Universal Progress, from Franklin to Kennedy, vol. 1, 2020.