Americans for Financial Reform Puts Spotlight Back on Wall Street

July 26, 2018–Not since the movie “The Big Short” has Wall Street been so exposed as the enemy of the American public. In a rare performance, in the Hart Senate Office Building on July 24, truth was told in a forum on the economy on Capitol Hill.  In contrast to the recent reports of the “great recovery,” an array of accounts unfolded which revealed the great tragedy of the U.S. economy. As one speaker said: “We’ve seen this movie before.”

The organizers of this event, Americans for Financial Reform (AFR)  Executive Director Lisa Donner, and AFR Policy Director Marcus Stanley selected a prestigious cast of characters to tell the story of what has happened “Ten Years After the 2008 Financial Crisis.”

Setting: “It took the worst crisis since the Great Depression…” 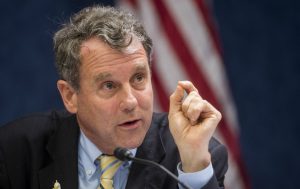 Senator Sherrod Brown set the stage, drawing the contrast between how Wall Street and Main Street have fared over the last 10 years. Not only has nothing been done to correct the problem, he said, but things are worse: banks are bigger, no one has gone to jail, and the real productive economy has yet to be found. Excerpts from his remarks follow:

It took the worst crisis since the Great Depression…to get Washington to wake up.

We passed Dodd-Frank so that Main Street would never have to bail out Wall Street again.

And Dodd-Frank did a lot of good things – established the Consumer Financial Protection Bureau, put limits on derivatives, and forced the Fed to pay attention to risks at the biggest banks.

Many of us thought there was – and still think there is – something fundamentally rotten in the way the financial industry does business.

We’ve seen it with scandal after scandal at Wells Fargo.  We’ve seen it at Equifax, which exposed 145 million Americans’ personal information to cyber hackers. A year later, Congress has done nothing.

We continue to see the power Wall Street has over the political system and the economy.

Look at the tax giveaway Congress passed last year –more than 80 percent of the benefits are going to the top one percent by the end of the decade.

Industry lobbyists have spent every day since 2010 fighting to weaken and roll back the rules. And the collective amnesia has spread in this town.

This year, bank lobbyists convinced this Congress to pass legislation to roll back and water down the Dodd-Frank rules— for mortgages and large banks.

And now we’re seeing exactly what happens when watchdogs are more like corporate lapdogs.

The recovery looks pretty good from the executive suite at the top of a Manhattan skyscraper. But it looks a lot different from a kitchen table in Mansfield or Marion or Marietta.

Hours are flat and real pay has actually dropped slightly over the past year for most workers.

Other studies suggest a correlation between the Great Recession and the opioid epidemic, with a rise in opioid abuse in areas with higher unemployment rates.

Meanwhile, Wall Street and corporations are doing better than ever – they’re on track to distribute $600 billion or more through stock buybacks this year. Last year, the CEOs of the six largest banks got an average raise of 22 percent.

We still need to fundamentally change how we think about the economy.

Over the past forty years, the link between productivity and wage increases has been broken. Workers produce more and more profit for companies, but don’t see the benefits.

CFPB: “The agency has paid off”

Senator Elizabeth Warren focused her fifteen minute address on the Consumer Financial Protection Bureau (CFPB).   “We built this agency, we did our best to move it independent of politics,” Warren said. “And the agency has paid off.” 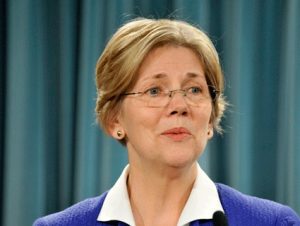 Warren spoke on how her investigation since the 1980s looked into bankruptcies and how the Americans were being squeezed. “In middle class families, things have shifted, there is no savings, there are multiple incomes, and huge debt loads.  The banks are “lending to people who are desperate, charging “high interest rates,” giving “big profits on the front end.”

She said the “financial crisis was not inevitable.  It was brought on by Wall Street and enabled by Washington.” “The moral of this story is simple: Without basic government regulation, financial markets just don’t work.”

Warren said the Dodd-Frank Act, the 2010 law that toughened financial regulation in response to the crisis, “was not perfect, but it moved us in a big step in the right direction.”

She called for a “crackdown on the cheaters.” In reference to  Wells Fargo, she noted that “the former CEO is gone, but replaced by another insider.”  She called for personal accountability, and warned about the big Wall Street lobbyists.

Sheila Bair attacked the recent deregulation. “That’s the thing that’s frustrating to me now is we’re seeing swing-back, deregulation and all this rhetoric about, ‘Oh, we went too far,’” Bair said. “If Dodd-Frank had a shortcoming, it was that it didn’t go far enough, not that it went too far.”

“There’s a lot of opacity around the stress tests,” Bair said. “Putting too much confidence in your stress tests results I think is really ill-advised.”

Thomas Hoenig responded to the fraud of stress tests.  “We can’t hide that away by saying we now have stress tests and living wills,” Hoenig said. “You need capital. You don’t need 100% capital, I know that. But you need capital that says, ‘I can absorb a shock.’ ”

In answer to questions from AFR’s Marcus Stanley on the ineffectiveness of stress tests, and the need to go further, both Hoenig and Art Wilmarth addressed the issue of restoring Glass Steagall . Wilmarth detailed the 30-year campaign to make Glass-Steagall disappear, and how all the attempts to correct the problems come out of “loopholes.”  He warned that we are “lurching from crisis to crisis.”

Hoenig stated plainly that “Glass Steagall would be unlikely without another systemic event.”  He admitted that when we had it, we had a much better system.  “I’m not saying it can’t work, but not likely.”  He proposed that the government “simplify the Volcker rule.”

The Risk:  “We’ve Seen This Movie Before”

Robert Jackson warned against having “blind faith in the markets.”  He said bluntly, “Lehman was in the business of making money, not protecting families.”

“What we must not do is defer to institutions to tell us what to do.” 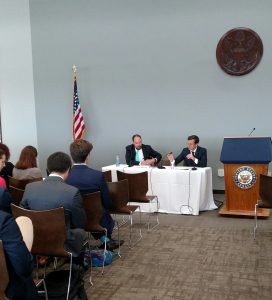 He warned that since the 2008 crash, “The risk has been moved into the shadows, into private funds.”  “I’m worried there’s a ticking time bomb in there.”

He continued: “There’s no full sunlight on the risks we face.  This is what keeps me up at night.”

“The SEC has no grasp of the problem.”  He made clear that these were his own personal views. “Nobody agrees with me, right now.”

He admitted that “after 10 years, the middle class is still devastated”, and that they have been “left behind in the recovery, while the markets are at an all time high.”

He warned against stock buybacks, and looking at the consequences.

Whether we flashback or flash-forward, Robert Jackson was emphatic in his conclusion: “We’ve seen this movie before.”