May 20, 2019—The following resolution was passed unanimously on May 6 by the Alexandria, Virginia Democratic Committee. Similar resolutions are being debated, and passed, in Democratic committees, city councils, and state legislatures nationwide. The full text follows: 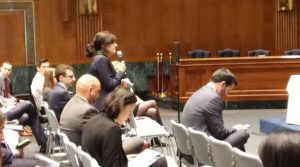 Whereas, the United States faces a widely acknowledged infrastructure crisis, estimated to be $4 trillion less than necessary to bring our roads, bridges, and other public structures to meet current standards,[1]

Whereas, the American Society of Civil Engineers gave the State of Virginia a grade of C- in its 2017 Infrastructure Report Card,

Whereas, Virginia received a D grade on the condition of its roads, with the gridlocked District/Virginia/Maryland metro area ranked second worst in the nation,

Whereas, 935 bridges are rated structurally deficient, and the state received a D on wastewater treatment, with a projected deficit of $6.5 billion over the next two decades,

Whereas, the City of Alexandria has undertaken a major and costly sewer upgrade project, built new schools, and budgeted funds for transportation improvements,

Whereas, the Commonwealth of Virginia needs to expand its rail system to meet current and growing population and freight demands,

Whereas, meeting the needs for modernization of our infrastructure is beyond the fiscal capacity of the Commonwealth and most states,

Whereas, federal funds would reduce fiscal strain on local and state governments and facilitate critical projects,

Whereas, the Commonwealth has the fiscal capacity for partial funding of infrastructure projects, as do other states and localities, we must have a reliable cost-sharing public partner for long-term stable funding for infrastructure modernization,[2]

Whereas, a National Bank for Infrastructure and Industry could partner with Virginia, other states, and their instrumentalities to provide shared responsibility for the necessary reliable funding,

Whereas, The National Infrastructure Bank would be capitalized at $3-4 trillion, within current fiscal constraints[3].

Whereas, a report by the Brookings Institution has concluded that “There is strong evidence that a period of increased infrastructure investment effort could provide large benefits to the American economy. It could provide a fiscal expansion in an economy where aggregate demand growth has been stubbornly slow for years….”[4]

Whereas, this policy has been widely endorsed by national associations of public officials and institutions [5].

NOW THEREFORE, BE IT RESOLVED THAT the Alexandria Democratic Committee hereby urges our elected Congressional delegation to introduce, support and enact legislation to create and authorize appropriations for The National Bank for Infrastructure and Industry.

BE IT FURTHER RESOLVED, that copies of this resolution be delivered to all members of the Virginia Congressional Delegation for their immediate consideration and action.

[1] The American Society of Civil Engineers, U.S. Chamber of Commerce, International Association of Machinists and Aerospace Workers and the North American Building Trades Unions all estimate the shortfall at approximately $4 trillion. This does not account for needed spending on new projects, including high speed rail systems, water projects, a modernized power grid, and nationwide broadband.

[2] The Bank could provide Virginia’s share of funding for Metro, thus avoiding the Hobson’s Choice of funding its share of metro by diverting money away from other important regional transportation projects.

[3] The Bank would be funded on the successful model of George Washington and Alexander Hamilton’s First National Bank of the United States which used the debt incurred to finance the Revolutionary War as the source of capital. The same approach was the basis for capitalizing subsequent institutions, including the Lincoln Banking Acts and Franklin Roosevelt’s Reconstruction Finance Corporation. Bondholders who hold existing Treasury notes would be offered preferred stock shares in exchange for those notes. The shares would pay interest 2 points higher than the bond rate. Additional financing would come from Congressional appropriations.