Jan. 13, 2020—Would Alexander Hamilton have been able to contribute as much as he did to the nation had he been born in the mainland colonies?  Alexander Hamilton Awareness Society Vice-President Sergio Villavicencio set out to answer this question in his kickoff speech during the January 11 Hamilton birthday celebrations at the Hamilton Grange. His answer was an unqualified “no.” 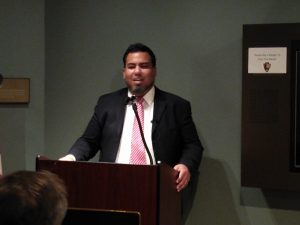 After noting ironically that of course he (a Peruvian immigrant) was not biased on the question, Villavicencio mustered a compelling argument for his assertion that Alexander Hamilton’s formative years on the Caribbean islands were decisive in preparing him for the prominent role he played in establishing the United States constitutional republic. (A video of Villavicencio’s talk can be accessed here.

The core of Villavicencio’s thesis was how the young Hamilton’s experience in the multicultural trading world he grew up in prepared him for dealing with the situation he would face on the continent. The Caribbean islands were one of the world’s main centers of international commerce: in fact, Nevis, the island where Hamilton was born, was called the “queen of the Caribees.” But the boy Hamilton actually experienced three of the major trading islands, having moved to St. Eustatius and St. Croix after Nevis.

Thus Hamilton grew up in three different cultures. While Nevis was British, St. Eustatius was Dutch, and St. Croix was Danish. He thus imbibed three distinct national mentalities, and absorbed their different approaches to life.  All three were oriented toward commerce and manufacturing, Villacencio asserted, but especially the Dutch. This would serve as a pre-taste of what Hamilton would encounter in New York City, which had by no means shed the influences of its Dutch beginnings (New Amsterdam).

Hamilton’s need to deal with multiple mentalities went onto a whole new level when he was orphaned and went to work at the Beekman and Cruger trading house in St. Croix. There he was thrust into managing the inflow and outflow of shipments, during a period when his boss was incapacitated by illness for five months. As a 16 year-old boy, he was effectively entrusted with running the business. That meant he had to handle multiple currency transaction, check shipments for their accuracy, ensure the prompt payment of proper customs duties, and the like, all the while dealing with people of different cultures, with different currencies and customs. 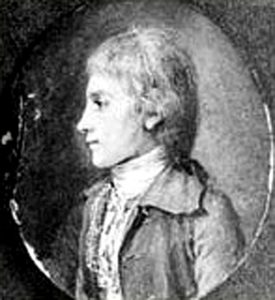 Painting of Alexander Hamilton at a young age.

The record shows that young Hamilton devoted his attention to every detail. He even developed specific guidelines for boarding ships, which, Villavicencio noted, survived up until the 1960s, when they were used during the Cuban Missile crisis!

Such experience prepared him well to deal with the problems he would face later as Treasury Secretary, where he had to enforce customs collection, deter smuggling, establish a new currency, and unite disparate states which were operating in many respects as different countries, and often at each other’s throats.

One of Villavicencio’s most striking points was his contrasting the historical situation in South America with the development of the United States.  Despite having two Washington-like figures – Simón Bolivar (1783-1830) and José de San Martin (1778-1850) — the South American nations were never able to form an effective union, and become a powerful sovereign nation. What made the difference?  In large part, Villavicencio argued, “Alexander Hamilton made the difference.” It was the kind of leadership exercised by a young immigrant, who came to the mainland with no state loyalties, and was able to envision and fight for a great nation. (For more on that vision, see my post on Hamilton’s Federalist no. 11.) 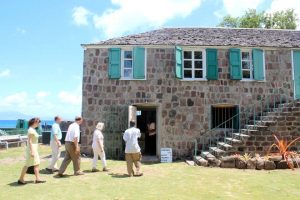 Hamilton’s birthplace in Charlestown, Nevis, during an AHA Society visit.

Villavicencio also touched on Hamilton’s fight for creating an industrial nation, in the face of the overwhelming commitment to agriculture in the young United States. He stressed the influence of the mentality he had encountered with the Dutch, who were noted for both their cosmopolitan approach, their trading prowess, and penchant for industry.

While Villavicencio did not deal at length with the slavery issue (slaves having been a major component of the triangular trade in the Caribbean Islands), he noted the contrast between slavery there (where the ratio of the enslaved to whites was 9 to 1) and slavery in America, where, at its height in states like Virginia, it hit 3 to 1. (There was also a huge discrepancy in the death rates, it being many times higher on the Caribbean plantations.) Once in the mainland colonies, Hamilton’s actions toward the enslaved were the “most progressive” of the Founding Fathers, he said.

As was discussed in the question period, Hamilton succeeded in his nation-building efforts – creating the national bank, the national currency, and bringing the nation into solvency – despite the fact that he was broadly reviled as a foreigner. Indeed, as one questioner raised, he likely even had a “foreign accent.”

Villavicencio summed up his answer to his original question thus: Alexander Hamilton’s ability to becoming an “indispensable Founding Father” of the United States absolutely depended upon his experiences in his formative years in the Caribbean Islands.  Like all immigrants, he brought to our continent the skills and knowledge he had accumulated there, and put them to work to build the country.