A Timely Remembrance of President Eisenhower

May 17, 2021—Neither Republicans nor Democrats have a kind thing to say about President Dwight D. Eisenhower these days. Yet, provoked by the horrors of the Middle East crisis, I found myself looking once more at the record of the last General we had as President of the United States. What I dug up was a history of statesmanship which speaks to the enduring, if too-weak, influence of American System thinking in the otherwise dismal decade of the 1950s. 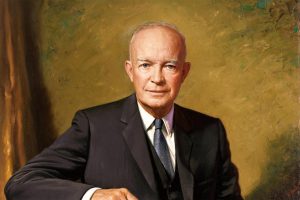 Granted, Eisenhower (Ike) was no FDR or Abraham Lincoln. But a simple listing of some of the major initiatives which Ike took during his presidency, should challenge ideologues in both parties, and stimulate a certain amount of humility in their views of both history and our present political crossroads.

A TVA on the Jordan. Faced with the roiling tensions in the Middle East in the wake of the establishment of Israel in 1948, the newly elected President Eisenhower looked for a solution in the tradition of FDR: He put his support behind the development of a TVA-style water project in the Israel-Jordan area. Cooperation in building such a water system would not only have addressed the problem of water shortages in the region, but also facilitated cooperation among the region’s residents for a common aim.

Ike’s action was precipitated by hostilities between Jordan and Israel over water usage of the Jordan River. The President dispatched a mediator, Eric Johnston, to try to resolve the conflict.  Johnston’s starting plan came from a United Nations proposal that utilized the principles of FDR’s TVA; in fact, former TVA managers played leading roles in developing the plan.  Like the TVA, what became known as the Johnston Plan envisioned regionwide development that would provide ample water for all populations in the region. 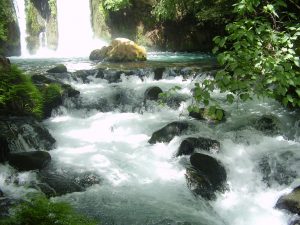 Johnston’s Plan would have turned Mideast water from a source of conflict, to one of cooperation. Above, the Banias River.

Slow-going negotiations eventually brought Israel and the Arabs together on the outlines of a plan, but eventually, especially after the Suez crisis, agreement became impossible. The legacy of failure remains today, with life-threatening inequity of water supplies in the region, to the detriment of the Palestinian population, in particular. And never again has a U.S. President intervened to promote such a peace-through-development plan.

The Suez crisis. Perhaps the most dramatic of Ike’s strategic interventions occurred in 1956, when, with the support of France and Great Britain, Israel moved militarily to seize the Suez Canal. The Israeli effort had begun with attacks on Gaza and the West Bank, and rapidly escalated to seizing the Canal, which the Egyptian government had recently, and legally, nationalized. All indications were that Israel expected U.S. support, or at least acquiescence, given that the assault occurred on the eve of the 1956 Presidential election. Surely, Eisenhower would not risk the loss of the Jewish vote by refusing to support the Israeli move.

Yet, Ike defied the calculations of Israel and its imperial backers. Despite the fact that Great Britain joined Israel and began bombing in Egypt, the President authorized U.S. introduction of a resolution in the United Nations General Assembly condemning the Israeli invasion and calling for sanctions against Israel until it withdrew to its original borders. In addition, Ike announced U.S. sanctions against Israel, including suspension of aid.

These actions were taken on Nov. 1, 1956; on Nov. 6 Ike was resoundingly re-elected, with more Jewish votes than four years earlier.  He continued his refusal to back Israel in front of considerable pressure from within the Congress and went on national television to elaborate on why he refused to accept the aggression. Within a short period, Israel withdrew from Gaza and the Sinai Peninsula. 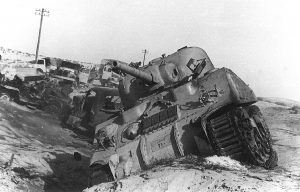 Egyptian tanks destroyed in Israel’s invasion of Egypt in 1956.

Atoms for Peace. Approximately a month later, President Eisenhower took the podium at the United Nations to propose the “Atoms for Peace” program, an international initiative aimed at controlling the spread of nuclear weapons, and promoting the peaceful use of the atoms for medicine, energy, and other human goods. “This greatest of destructive forces can be developed into a great boon, for the benefit of all mankind,” Eisenhower said.

It was as a direct result of Ike’s proposal that 47 countries received radioactive isotopes from the U.S.’s Oak Ridge laboratories, and proceeded to establish research reactors for developing civilian usage. Indeed, Ike specifically declared that he didn’t want “Third World” countries to have to be dependent upon the United States for such advanced, life-saving technology.

Such a policy of sharing technology for the common good of mankind is a derivative of American System policies which have in large measure been erased from memory today.

Admittedly, it is harder to find examples of outstanding leadership by President Eisenhower on domestic policy.  His economic advisers, and the Republican Party leadership, were bent on erasing the legacy of FDR. Demands for cutting the power of the Federal government and cutting taxes were rampant. Where Ike disagreed, he often could not get his way. I want to cite two striking examples.

The National Highway System. The first has to do with the building of the national highway system, a signature project from the Eisenhower era often cited today. Like most plans for Federal infrastructure in the United States, the National Interstate and Defense Highways Act of 1956 was justified by national defense needs, as well as commerce. While its implementation coincided with a drive to shut down the U.S. rail system, build up the suburbs at the expense of the cities, and destroy minority communities in the cities (“urban removal”), there is no indication these results were the President’s intent.

Eisenhower’s original plan was, in fact, never implemented. He called for setting up “a federal corporation which would issue $20 billion of long-term bonds to be repaid over the 32-year period, 1956-87, from the existing two-cent federal motor fuel tax.” The bonds would have an interest rate of 3%. Thus, Eisenhower and the head of his advisory committee on the program, Gen. Lucius Clay, planned to issue 30-year bonds, at 3% interest, for a long-term capital improvement project, separated out from the U.S. operating budget. 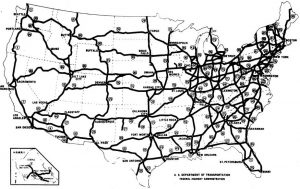 Ike’s proposal of a capital budget flew in the face of the states’ rights and fiscal conservative thinking of his party, in particular. It was defeated in favor of the current Highway Trust Fund, which has been allowed to languish for long periods due to Congressional inaction, a fact to which the sorry state of U.S. highways attests.

Military spending. The Eisenhower presidency occurred in the midst of the Cold War, a war he inherited from the administration of Harry Truman. As a military man, Ike might have been expected to seek solutions to the political conflict with the Soviet Union by military means; yet, that was not his outlook at all, as these paragraphs from his April 1953 speech to the American Society of Newspaper Editors demonstrates:

Every gun that is made, every warship launched, every rocket fired signifies, in the final sense, a theft from those who hunger and are not fed, those who are cold and are not clothed.

This world in arms is not spending money alone. It is spending the sweat of its laborers, the genius of its scientists, the hopes of its children. The cost of one modern heavy bomber is this: a modern brick school in more than 30 cities.  It is two electric power plants, each serving a town of 60,000 population. It is two fine, fully equipped hospitals. It is some fifty miles of concrete pavement. We pay for a single fighter plane with a half million bushels of wheat. We pay for a single destroyer with new homes that could have housed more than 8,000 people.

This is, I repeat, the best way of life to be found on the road the world has been taking. This is not a way of life at all, in any true sense. Under the cloud of threatening war, it is humanity hanging from a cross of iron.

What an extraordinary difference there is between this thinking and that of our politicians today!

There is much more one could cite about President Eisenhower’s resistance to abandoning the American System of FDR: his continuation of the heavily graduated income tax system and warnings against the military-industrial complex come most quickly to mind. More striking were his actions to support desegregation. While probably many examples of contrary policies could be mustered, President Eisenhower’s positive contributions must not be denied.

More than that: I believe it is high time they be remembered, as we as a nation reckon with how we have arrived at the point of decision that now faces us in the international and economic crises of gargantuan proportions threatening our nation and the world, and how to restore the American System for the general welfare of all.

Background for this article came from research by Marsha Freeman, Edward Spannaus, and Richard Freeman.

Nancy Spannaus is the author of Hamilton Versus Wall Street: The Core Principles of the American System of Economics. It is available here.