A Timely Argument for Glass-Steagall

Oct. 14, 2020—The Oct. 2 release of Arthur Wilmarth’s new book calling for a new Glass-Steagall law is timely, and critical.  Unfortunately, it is not clear that the relevant political figures are yet prepared to listen.

Wilmarth’s book is entitled Taming the Megabanks: Why We Need a New Glass-Steagall Act. The author summarized his book’s argument in a column in The Hill on Sept. 30, while documenting the way that the pumping up of the financial markets during the pandemic has created what he called a “global doom loop” that puts the world on the path to a new blowout and Great Depression. 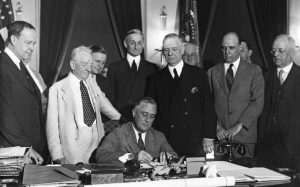 The George Washington professor-emeritus has been making his argument for some time, notably at a September 2018 forum at the National Press Club dedicated to discussing the lessons and aftermath of the 2008 financial blowout. At that forum, five financial experts fervently urged putting the Wall Street mega-banks back in the Glass-Steagall box, before disaster ensued.

As I have argued before, FDR’s Glass-Steagall regulations that mandated the separation of commercial and investment (read speculative) banking are totally in line with the principles of the American System of Economics. Those principles call for credit to be an instrument of “public utility,” rather than the profit of private interests. And public utility, like the national banks which Alexander Hamilton proposed, calls for investment in the nation’s ability to produce—industry, agriculture, infrastructure, and commerce, i.e. the general welfare.

It is well known that the trillions of dollars which the Fed has thrown into the banks since the 2008 crash have not gone into rebuilding the nation’s real wealth. This has become even more scandalously clear with the trillions issued to Wall Street during the COVID crisis.

It’s time for Glass Steagall, and I strongly recommend this book.

But let’s clear away one of the myths which has been used to oppose the reinstatement of Glass-Steagall: the lie that its 1999 repeal had nothing to do with the financial crash of 2008-9. Professor Wilmarth devastated this lie in a research paper published in 2017, whose main points I summarized in November 2017 post. I quote from that post here:

Wilmarth contends that the loosening of banking separation, including by eliminating Glass-Steagall in the Gramm-Leach-Bliley Act (1999), was “highly consequential” because it “(i) allowed large banks to become much bigger and more complex, and to undertake a much wider array of high-risk activities, and (ii) permitted securities firms and insurance companies to offer bank-like products (including deposit substitutes), all of which helped to fuel the catastrophic credit boom of the early 2000s. I therefore disagree with commentators who argue that those laws did not have any significant connection to the financial crisis.”

Wilmarth points to the specific mechanisms by which this connection occurred, and says that the danger of a new crash can be reversed by shrinking the shadow banking system, and prohibiting “FDIC-insured banks from entering into derivatives, except for bona fide hedges against risk exposures arising out of traditional banking activities.”

What Wilmarth proposes, is exactly what a new FDR-style Glass-Steagall law would do. And I would propose another lesson from that Hamiltonian president as well. 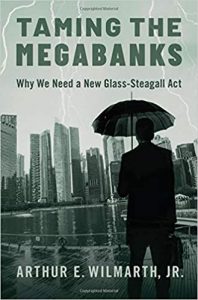 The FDR administration too, coming into power in the midst of the financial and economic collapse, was faced with the need to maintain a solvent banking system. The Federal government did provide liquidity to the banks, including the big ones, but under FDR, it insisted on exerting some control. And, as documented by Steven Fenberg in his book on Jesse Jones and the Reconstruction Finance Corporation (RFC), when the big banks refused to lend to businesses and farmers, the FDR administration turned the RFC into a bank that would do so.

Today, the implementation of a National Infrastructure Bank, as proposed in H.R. 6422, would fulfill the same function as that RFC, and more. Combined with Glass-Steagall, it would put us on the road to an actual recovery.

Nancy Spannaus is the author of the book Hamilton Versus Wall Street: The Core Principles of the American System, available at https://www.iuniverse.com/en/bookstore/bookdetails/788568-Hamilton-versus-Wall-Street or https://www.amazon.com/Hamilton-Versus-Wall-Street-Principles-ebook/dp/B07NXXQ2WN