A Spotlight on Virginia Federalists

Dec. 7, 2020–The newly released 2020-2021 edition of Bulletin of Loudoun County History contains a story that will come as a surprise to many: Loudoun County, Virginia was a stronghold of the Federalist Party up until the demise of that institution in 1817. Indeed, this fact even surprised me, the author of the article, which is entitled Loudoun County: Federalist Stronghold.

I began this project on Loudoun Federalism last spring, in anticipation of giving a lecture “with a local angle” on my book, Hamilton Versus Wall Street: The Core Principles of the American System of Economics. With the arrival of the COVID-19 pandemic, that lecture (scheduled to be given at the Lovettsville Historical Society[1]) was cancelled, but I proceeded to write up my findings nonetheless.

Now the results have been published and can be obtained by purchasing the Bulletin on Amazon. You will be able to enjoy many other articles in the issue, ranging from major research features to biographies and short profiles, as well.

Let me whet your appetite with a short summary of my article.

The state of Virginia was well-known as the center of Jeffersonianism in the days of the early U.S. republic, but that’s not the whole story. In addition to being the home of legendary Federalists George Washington and John Marshall, Virginia had certain regions which were dominated by the Federalist party. Besides some of the major mercantile cities, these regions tended to be in the western, more mountainous parts of the state, which was populated largely by small farmers. (Some of those areas are in West Virginia today.) 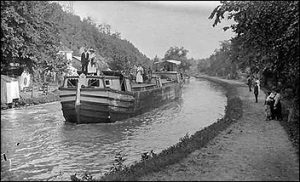 The C&O Canal, shown here in 1910, was one of Loudoun Congressman Mercer’s major accomplishments. It was inaugurated in 1828.

While Federalism generally, including in Virginia, was not synonymous with the Hamiltonian principles I discuss in my book, it shared critical aspects of Hamilton’s program.  At the top of the list was the demand for Federal support for building infrastructure, followed by the support for expanding credit for agriculture, commerce, and manufacturing, through expanded banking. Federalists in Virginia wanted to have the benefits of connection to the rest of the state and country through infrastructure. They also tended to oppose the domination of the state government by the Tidewater plantation owners, and to be more likely to be anti-slavery.

In my article, I focus on the history of the two most prominent Federalists from Loudoun, Leven Powell and Charles Fenton Mercer.  Never heard of them? Mercer, in particular, played a major role in national politics as the Congressman who successfully fought to realize George Washington’s vision of a Potomac waterway to the West, through the establishment of the Chesapeake and Ohio Canal. Both these men also had a lasting impact on the County, establishing two towns (Middleburg and Aldie, respectively), and aiding in the building of various turnpikes and waterways.

My major purpose in writing this article was to excite interest in understanding and reviving Alexander Hamilton’s economic principles, which, as I argue in Hamilton Versus Wall Street, were the crucial ingredient in stimulating our periods of greatest economic growth. Hamilton was never in Loudoun, as far as anyone knows, but his ideas had a critical influence. It is also very interesting to see how those ideas were picked up, adapted, and put to work, in local circumstances, moving our country forward.

Indeed, a local historian friend who specializes in research on the Civil War found Loudoun’s Federalist history of significance in explaining the pro-Union stance of northern Loudouners in that war. 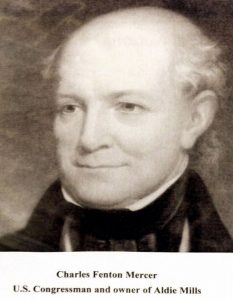 I agree with those historians who argue that a straight line can be traced from the Federalist tradition, with its emphasis on government-led economic development to unify the nation, to Lincoln Republicanism. Charles Fenton Mercer himself is a key example, having started as a Washington Federalist, and ending up in the Whig Party. The Whig Party, of course, was the party in which Abraham Lincoln launched his career, and from which the core of the Republican Party was formed. You can find out much more about how, and through whom, this transmission belt worked in my book, Hamilton Versus Wall Street.

A Road to National Unity?

In today’s environment, there is a terrible tendency to paint regions of the country with broad brushes, overlooking crucial differences and distinctions which might provide the basis for positive change toward national unity. States are designated either “red” or “blue,” even when huge swaths of their populations may be of the opposite political party. Certainly this is not new. The Jeffersonian party actually controlled the state political machinery of Virginia throughout the entire period that Federalists dominated Loudoun and elected representatives to the Congress. The minority party was in some respects left out in the cold.

But Federalist Charles Mercer, during his time as a state delegate, as well as a Congressman, was able to work in this environment to make major strides toward building national and state infrastructure, democratizing state representation, and criminalizing the slave trade.

I believe the key was his determination to concentrate on his economic program and benefits which it would bring to the population, rather than partisan politics. Can we not find in this approach some lessons for today?

[1] Lovettsville is a small town, just south of the Potomac River, in northwestern Loudoun County in the area once called the German Settlement. It is the town where I live.