A Southern Voice for Complete Abolition

Oct. 2, 2021—Have you ever heard of Hinton Rowan Helper? Neither had I until this summer, when a friend who knew I was working on the persistence of American slavery called it to my attention. Yet the North Carolinian Helper played a prominent and some say decisive role in mobilizing the vote for Abraham Lincoln in 1860, with the publication of his book The Impending Crisis of the South: How to Meet It. 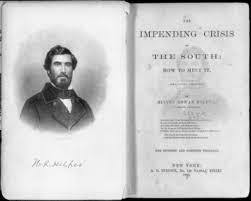 But why is this book important today?  First, it gives the lie to the all-too-prevalent belief that the South was solidly behind the slave system. But more important in my view, is the extensive evidence Helper musters on the economic and cultural degradation which the slave system created.  This flies in the face of those who, even today, insist that slavery was a, or even the, source of the wealth of the United States in becoming a world power. (The entire book is available online here.)

To the contrary. Slavery was and is an economic as well as moral evil, and it required the embrace of a pro-manufacturing, pro-literacy, pro-progress economic policy to wipe out this evil.  For all his other limitations and faults, Helper appears to have understood that.

Helper’s book was an extensive, heavily documented, and no-holds-barred call for abolition of chattel slavery.  He calls the “slaveholding oligarchy” “robbers, thieves, ruffians, and murderers.” He excoriates the poor whites as cowards for allowing the South to become a “cesspool of ignorance and degradation.” He presents chart after chart demonstrating the impoverishment of the South by the slave system and concludes: “In this extra crisis of affairs, no man can be a true patriot without first becoming an abolitionist.”

Helper’s book was first published in 1857, but then republished in shortened form with the support of more than 60 Republican Congressmen in 1860, in plenty of time to circulate widely before the presidential election. It aroused so much animosity from the Southern lawmakers that they used it to prevent the election of Ohio Rep. John Sherman as Speaker of the House.  It was banned throughout the South because it was considered an incitement to a slave revolt. 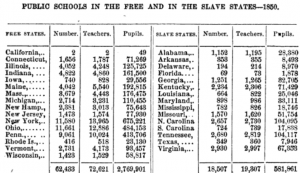 Comparing free and slave states on schools. A shocking discrepancy of 2.7 million students vs. half a million. (from census data)

I am well aware of the fact that Helper wrote racist diatribes later on in his career. In that light, it is all the more remarkable that in The Impending Crisis, he outlines an abolition plan that called for disenfranchisement of slaveholders, freeing of the slaves with no compensation to the slaveholders, and payment of at least $60 apiece to the freed slaves. Not surprisingly, he wanted some of that money to be used to pay for passage of the freed slaves to Liberia; he was hardly in favor of an integrated society.

In this book, however, the targets of his vitriol are the ignorant, lazy whites and the slave-holding oligarchs whom they tolerate. There are no derogatory statements about blacks and their capabilities, and some even took his arguments to be justifying violent slave revolt.

The strength of Helper’s book (which I understand was not unique in this regard) was in its presentation of the statistics which demonstrated the utter impoverishment of the South by the slave system. After showing how the Southern states had all the natural resources and population necessary to prosper as much, or more, than the Northern states, Helper marshalls statistics from the 1850 census to demonstrate its utter poverty.

“Poverty, ignorance, and superstition are the three leading characteristics of the non-slaveholding whites of the South,” Helper asserts. Manufacturing is essential to lift the condition of man, and the slavocracy has refused to permit industrialization, large cities, mass education, and infrastructure. He cites the particular case of Abbott Lawrence, who proposed to establish a textile mill in Richmond, Virginia in 1836-7. According to Helper, Lawrence was run out of town as interfering with Southern institutions (i.e., slavery), and therefore went and built up the mill towns of Lawrence and Lowell, Massachusetts. 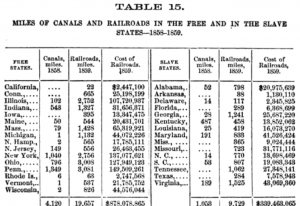 Comparing free and slave states on canals and railroads. (from census data) The biggest discrepancy is on canals–more than two to one.

Helper treats his readers to an extensive series of charts to support his case on the impoverishment of the South. He documents the dearth of canals and railroads, of libraries and schools, and of inventions. And while he constantly notes that the North benefits by becoming the supplier of the manufactured goods which the South does not produce, he does not blame the North, nor (as he rightfully could) the financial powers (heavily linked to Great Britain) which provided the essential support for the slave system.

I have included three of Helper’s charts in this short piece, to help document his point. (If you enlarge your screen, you can see the figures clearly.)

In effect, Helper’s economic argument and documentation serve as a proof of the correctness of Alexander Hamilton in his 1791 Report on Manufactures. In that brilliant report to Congress, Hamilton insisted that the development of manufactures was essential to the future prosperity of the United States, because it would benefit agriculture, contribute to unifying the nation, and make the nation independent of the imperial powers. 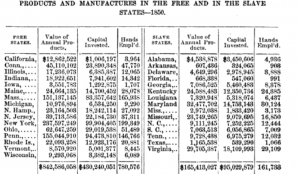 Comparing free and slave states on manufactures (from census data) A huge discrepancy on capital and labor.

Under the Washington and John Quincy Adams administrations, there were significant steps taken in this direction. But the more than two decades of rule by anti-manufacturing, pro-slavery administrations (1800-1824) took their toll, having led to a huge expansion of the slave population and territory, and grown the seeds for sectional conflict. President Jackson, with his anti-bank, anti-infrastructure policies, dealt the fatal blow in 1832.

Increasingly, the Southern leadership outright rejected Hamilton’s industrialization perspective, preferring to remain a quasi-feudal region, dependent upon Great Britain for a huge portion of its market and finance.

Individuals like Helper existed throughout the South but were not able to gain the political power to be victorious. A considerable amount of the blame has to go to the Northern financiers who joined the Southern oligarchs in opposing the industrialization policy, which was represented concretely by the tariff and the first and second Banks of the United States.

Of course, this is no academic matter. The principles embodied in Hamilton’s manufactures report, and the American System school which it spawned, remain valid today. And, as in the 19th century, their abandonment threatens to lead to disaster.