A Remembrance of Hamilton Rand Scholet

Aug. 6, 2021—The most appropriate way to respond to the tragically early death of Rand Scholet, founder of the Alexander Hamilton Awareness Society (AHA Society), is to press on with his mission of educating people about Alexander Hamilton. In this short remembrance, I want to review how he worked with me on that mission which we shared, and some of my hopes for advancing that cause.

For those who have never gotten an email from him, “HamiltonRand” was his traditional signature. 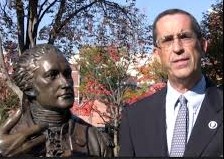 Rand Scholet with a statue of his hero, Alexander Hamilton.

Rand was an indefatigable advocate for Hamilton, and always seeking for ways to promote the truth about Hamilton, and counter the lies, as well as to learn something new. Rand’s fundamental belief, as he summarized it in a presentation to the Museum of American Finance in October 2012, was that Alexander Hamilton “created the vision and foundation upon which the UNITED States achieved greatness.” And he thought he had developed the irrefutable proof of that statement.

I also believe that to be true, and while I didn’t always agree with Rand’s evaluation of Hamilton’s policies, I believe Rand played a historically significant role in educating Americans about the indispensable contributions of Alexander Hamilton to our nation.

I first met Rand “on the phone” in the fall of 2017. The occasion was my attempt to find out the outcome of a Hamilton essay contest which had been sponsored by the AHA Society almost a year earlier. I had submitted a contribution entitled “Alexander Hamilton’s Genius Can Save Our Nation,” and wanted to know the outcome. Rand responded to my inquiry, and a long conversation followed.

Rand didn’t know the answer to my question, but he was anxious to find out who I was and what I was up to. After learning about the 1977 book of writings on American political economy which I co-edited (The Political Economy of the American Revolution), Rand nearly jumped for joy: He had it on his bookshelf! As we shared our views, he became more and more excited about potential collaboration.  I still have the email he wrote to the head of the AHA Society in Virginia, introducing me as a great find.

After I re-sent my essay to Rand, he responded that I had won second place!  That gave me a free year’s membership in the AHA Society and a nice little pin I still wear. But more importantly, I now had a connection with active Hamilton promoters, which would prove invaluable in the years to follow. 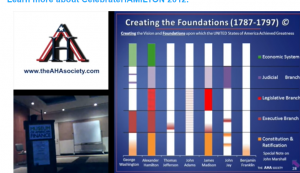 Rand’s chart showing how Hamilton made the most contributions to building our nation of 7 Founding Fathers.

I believe my first face-to-face meeting with Rand was in Washington, D.C. in May of 2018, at a commemorative event for the Society of the Cincinnati. The event featured an address on Hamilton’s career by Hamilton scholar Michael Newton, who had been honored by the AHA Society, basically serving as their unofficial historian. Rand greeted me in his usual ebullient style, and I met a number of his collaborators.

The next step was my visit in July of that year to what the AHA Society calls “Hamilfest,” a several-day celebration in New York City held in commemoration of Hamilton’s life and legacy around the time of the duel on July 11. Here I saw Rand in action, while attending lectures and the annual gathering at Trinity Church, the site where Hamilton is buried. We had further social time at the historic Fraunces Tavern.

It was an event during that Hamilfest that inspired me to write my book, Hamilton Versus Wall Street, which kept me very busy up through the rest of the year. I went to a number of Hamilton experts in search of a blurb for the book jacket, including Rand.  Much to my pleasure, Rand agreed to read the manuscript, then in near-final preparation.

As those of you who knew him would expect, he raced right through it (another all-nighter), and rushed to call me with his comments.  He was particularly excited about my documenting how Hamilton’s economic plans brought him up against the British imperialists, an angle he apparently hadn’t thought of before.  In addition, he provided a number of corrections of fact. 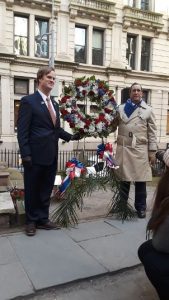 Rand next to a Birthday wreath for Hamilton at the January 2019 ceremony.. Damien Cregeau left, Rand Scholet right.

But alas, he did not think he could write a recommendation for the book: technically, its content fell outside the AHA Society’s concentration on the years of Hamilton’s lifespan. But he recommended that I acknowledge his having read the manuscript, thereby implicitly indicating his blessing. “It may help,” he told me, in my promotion efforts. Indeed, it was an honor to me, since by this time (2019), Rand had succeeded in getting the AHA Society to be the official interpretive partner to the Hamilton Grange National Memorial, Hamilton’s country home in upper Manhattan, which is run by the National Park Service. The AHA Society has established itself as a widely respected authority on AllThingsHamilton (the name of one of its websites), and its founder had offered the use of his name.

Standing Up for Hamilton

My subsequent collaboration with Rand centered on our joint efforts to counter the waves of misinformation which continue to plague Hamilton’s reputation. Rand was very appreciative of my willingness to go “out front,” so to speak, in taking on Hamilton’s critics.

Probably the most notable example came in the wake of the decision by the New York State Parks, Recreation and Historic Preservation  Department to publish a paper by Schuyler Mansion docent Jessie Serfilippi, which tendentiously sought to prove that Hamilton was an “enslaver.” Rand was very sensitive to the damage that Serfilippi’s assertions were doing, especially as they were repeated in print by “prestigious” outlets like the New York Times, Time magazine, and the Smithsonian Institution. 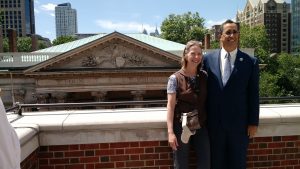 Rand and videographer Marianne Als in front of the First Bank of the United States.

After alerting me to the existence of the detailed refutation of Serfilippi by Philo Hamilton and Michael Newton, Rand suggested that it might be quite useful to send out letters to the editor challenging the slanders. A key target was the Albany Times-Union, the dominant newspaper in the area where the Schuyler mansion is located. The Times-Union had published an uncritical news story on Serfilippi, essentially presenting her as a brave challenger to accepted public opinion about Hamilton and slavery.

I wrote a letter to the Times-Union, and much to Rand’s surprise and delight, it was published![1]  You don’t know how important it was that you did that, he told me many times.  For the fact was that the slavery slander has put almost all prominent Hamiltonians on the defensive. Rand was ecstatic that I was willing to act quickly.  As we both realized, the longer that lies remained unchallenged in the public domain, the more damage would be done.

I am well aware that I am only one among dozens, if not hundreds, of individuals whom Rand encouraged and spurred to proclaim the truth about Alexander Hamilton. His incredible energy and enthusiasm were seemingly unbounded.  Having stepped down from the AHA Society board, he was still devoting many of his waking hours[2] to reading new history books, consulting on video projects, and prodding individuals to get active in the face of the current fad to denigrate or deny the nobility of many of our nation’s Founders.

In May of this year, for the first time to my knowledge, Rand put his appreciation of my efforts into writing. In response to one of my blog posts on the highly effective videos by Marianne Als, he published this note: “Your advocacy for the scholarly record on Alexander Hamilton continues to bless all who read your articles and reflect on your insights.  We are grateful for you as a consistent defender and explainer of Hamilton’s economic system and other key initiatives.  Thank you!!” 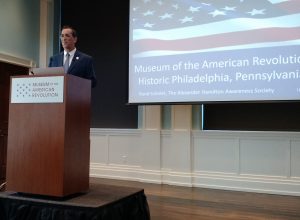 Rand speaking on Hamilton’s military history at the Museum of the American Revolution in Philadelphia.

In our last exchange, only a week before his death, Rand gave me one more gift. He addressed me as an NHA, or National Hamilton Advocate – one of the designations the AHA Society had devised to encourage scholarship and promotion of Hamilton’s true legacy. It was not clear to me, or indeed, to him, that this was an official designation from the Society, but in some ways, it doesn’t matter. Having that title from him was gratifying in itself.

Yes, Rand, I will continue to advocate for Alexander Hamilton and the American System of political economy which he launched. It’s a hard blow that you will not be here to help, but the fight will go on.

[1] The letter can be found on my blog at https://americansystemnow.com/will-hamiltons-accusers-recant/

[2] You might also be interested to know that Rand’s generous spirit also led him to spend a good deal of time aiding some of his elderly neighbors in Florida, including responding to their emergencies, and making it possible for them to remain in their homes.