Sept. 19, 2019–Participants had a rare opportunity to view the boyhood homes of Chief Justice John Marshall, at an event held at two locations in Fauquier County, Virginia, on Sunday, September 15.  The program, entitled “Patriot of the Piedmont: John Marshall and Fauquier County,” was sponsored by the Mosby Heritage Area Association (MHAA), which is dedicated to the preservation of the landscape and history of the northern Piedmont and the lower Shenandoah Valley.

John Marshall was the foremost representative and defender of Alexander Hamilton and the Federalist party in Virginia during his years in the Virginia legislature during the late 1780s and 1790s.  In his 35 years as Chief Justice of the United States, Marshall embedded Hamilton’s financial and economic policies into American constitutional law.  (For more background, see our series on John Marshall and the American System.) 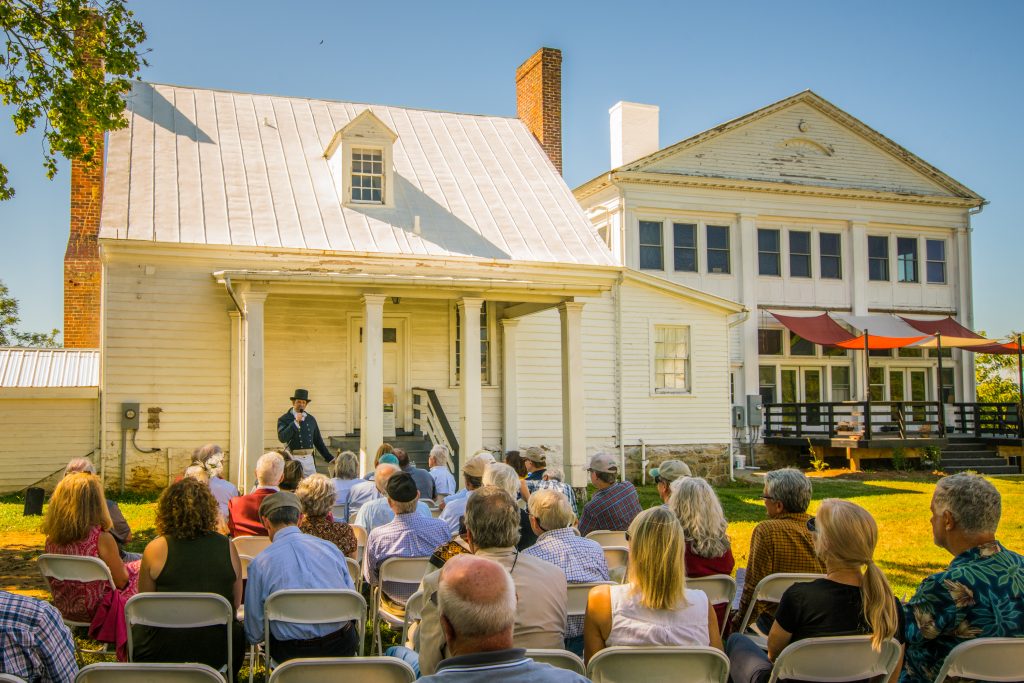 John Marshall was born in 1755 in the settlement known as Germantown in what is now Fauquier County.  His father Thomas had come to this frontier area in 1753 from Westmoreland County in the Tidewater area.[1]

The house where Marshall was born no longer exists, although the site is marked with a monument.  But remarkably, his next two homes, both under private ownership, are still standing, and were part of the September 15 program.

First is a rustic two-room cabin known as “The Hollow,” where the Marshall family lived from 1763 to 1773, and which is now being restored by the current owners.  This is in Leeds Manor at the foot of the Blue Ridge, and near the present-day town of Markham. 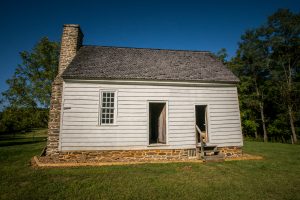 The second, built by Thomas Marshall and family in 1773, is about ten miles east of The Hollow near Marshall, Virginia, and became known as “Oak Hill.”  It was from here that John set out to join the Culpeper Minutemen in 1775, at the age of nineteen.  He served with the Continental Army until 1780, when he returned to Oak Hill. In 1784 he moved to Richmond to pursue his law practice.  In 1788, when he was first elected to the General Assembly, he purchased a city lot in Richmond and built a brick house which can still be visited today.

Although living in Richmond, John Marshall returned to Oak Hill every year until the end of his life. In 1819, he built an adjoining house for his son Thomas (on right on photo above).  Oak Hill remained in the Marshall family until the Civil War period.

One of these return visits to Oak Hill was the subject of a first-person portrayal of John Marshall at the Sept. 15 event, presented by Mark Greenough, who is Tour Supervisor and Historian at the State Capitol of Virginia.[2]

The year was 1815, after the end of the War of 1812, or “Mr. Madison’s War” as “John Marshall” termed it.  (Marshall opposed the war with Britain, viewing it as instigated by the Francophile Jefferson, among others. But once the war was underway, he took responsibility for assessing the possibility of erecting fortifications to defend Richmond.)

Mr. Greenough’s “Marshall” averred that he was looking forward to the construction of road and internal improvements now that peace had returned. This is certainly true: Marshall shared the popular enthusiasm for the “American System” which was sweeping the nation at the conclusion of the War of 1812.

Greenough’s “Marshall” accurately portrayed the real Marshall’s disgust with the New England Federalists and their 1814 “Hartford Convention” which advocated that five New England states should secede from the Union.  “The Federalists did themselves no favor by that convention,” Greenough’s Marshall declared. 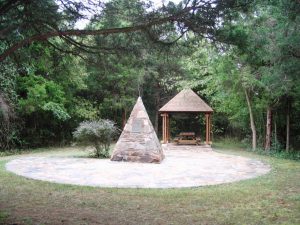 This being Virginia, the antipathy between Marshall and his cousin Thomas Jefferson could not be ignored. Among other things, “Marshall” mocked Jefferson’s enthusiasm for the “Revolution of 1800,” when he was elected President.  Jefferson spoke of this, “Marshall” said, “like someone who never fought in a real Revolution!”

“Marshall” entertained some questions from the audience – but only, of course, about events in 1815 or prior – and an entertaining and informative time was had by all.

[1] Thomas Marshall first occupied a house that had been abandoned by German settlers who were brought to America in 1714-17 as part of Gov. Alexander Spotswood’s iron project. A dozen of the Germanna families had moved about 20 miles north to found Germantown; later they relocated into the Shenandoah Valley.

[2] This author had occasion to view Mr. Greenough’s first portrayal of John Marshall, in a “philosophical exchange” between John Marshall and Thomas Jefferson presented at an event commemorating the 200th anniversary of Marshall’s appointment as Chief Justice, held at the Library of Virginia in Richmond in 2001.