A Lively Exchange in Shepherdstown

Feb. 6, 2020—My presentation of Hamilton Versus Wall Street at the Byrd Center for Congressional Education and Education at Shepherd University last night led to a lively exchange with the nearly 50 participants. This was the kind of discussion which conscientious citizens should be having all over the country, as they become informed about the content and spread of the American System of Economics founded by Alexander Hamilton.

Speaking at the Byrd Center next to the big screen.

I was introduced by the Byrd Center’s archivist Jody Brumage, after which I launched into my 45-minute power-point presentation on Hamilton’s American System and its role in building the United States and other industrialized nations. Throughout my talk, members of the audience could be overheard expressing amazement as they learned of new and unexpected aspects of the spread of the American System. The fact that Hamilton’s Report on Manufactures was translated into Russian by 1807?  Wow!

The final part of my presentation was devoted to debunking four prevalent myths about Alexander Hamilton.  One person attested to its effectiveness, when he told me that he had indeed studied Hamilton in school, but all that he had been taught, were the myths which I had demolished!

Myth Number One was that “Hamilton was an elitist who detested the common man.” This I took on by discussing the actual intent of Hamilton’s fight for the Constitution and his economic system, which was to provide the conditions for prosperity for all residents of the United States. This was dramatized by showing the massive demonstration in New York City, heavily populated by the craftsmen of the City, at the time the ninth states ratified the Constitution, as well as his patronage through the New York Manumission Society of the African School for black children.

Myth Number Two was that “Hamilton was the founder of crony capitalism, acting for rich financiers.” This I countered with a discussion of Hamilton primary objective – getting capital to build the nation, including manufactures – and his fight with money-grubbing speculators, especially Aaron Burr.

Myth Number Three was that “Hamilton was a militarist, seeking war and dictatorship.” To the contrary, Hamilton consistently argued that the young United States had to stay out of all wars for at least 20 years, due to its unpreparedness. And his advocacy of a “standing army,” better described as a professional core, put a heavy emphasis on training what turned out to be our Army Corps of Engineers.

Myth Number Four was that “Hamilton sought to replicate British institutions in the United States.” I refuted this lie by discussing the differences in purpose between the Bank of the United States and the Bank of England; Hamilton’s conflict with Adam Smith on manufactures; and the way that patriots from Germany, Russia, and Japan picked up on Hamilton’s concepts to industrialize their nations and free them of control by the British Empire.

My talk was followed by a lively question and answer period, which continued during the book signing that followed.  Questions included what Hamilton meant by his fear of mob activity; whether there were any major political figures promoting Hamilton’s ideas today; and where Hamilton might have gotten his ideas. Everyone I spoke with afterwards expressed their amazement at how much they had learned. 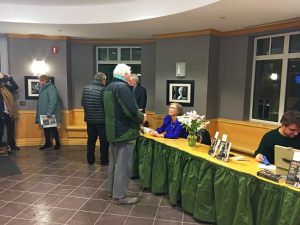 Discussion at the book table went on for an hour.

Perhaps the most heartening comment came at the end of the night by one woman, who said, “This event tonight gave me hope. If our nation could survive Aaron Burr, perhaps we can also survive the political crisis we face today.”

If more such citizen events can be organized to discuss Hamilton’s American System, there is hope indeed. All are encouraged to get in touch with me with their ideas to make that happen.