April 17, 2018—Minneapolis Federal Reserve Governor Neel Kashkari and Massachusetts Senator Elizabeth Warren were the lead speakers April 16 at a Howard University event on Too Big to Fail 10 Years after the Crash. Both stressed the fact that while Wall Street, bank managers, and the banks have come roaring back, “Main Street” (especially labor) has not. `Too Big to Fail’ is alive and well, as if the crisis never happened. 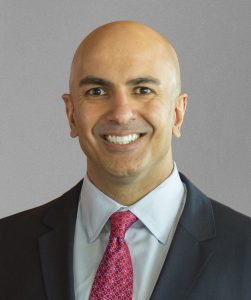 As the lead-off speaker, Kashkari argued that policymakers have “forgotten the lessons of 2008,” and that the “bailouts worked too well.” He then reviewed the plan he released at the end of 2017, which calls for “reduc[ing] the danger of a future crisis” by increasing the equity requirement for large banks to 23.5%, and changing the rules to prevent overleveraging by shadow entities such as hedge funds.

Under current conditions, he added, there’s a 70% chance of another major crisis “in the century.” [sic] He then proposed that, while the Wall Street officials who are enjoying renewed prosperity are unlikely to do anything, the labor movement which is still suffering from losses in the crisis should take on the Too Big to Fail problem as a priority.

After an intervening panel discussion, Sen. Warren gave the event’s concluding address. She reviewed the long process of deregulation which led to the 2008-9 crisis, including the 1999 repeal of the firewall between “boring” commercial banking and gambling, FDR’s Glass-Steagall. After claiming that some progress has been made since the crash, she detailed the current Congressional drive toward further deregulation.

She concluded with her alternative proposals to deal with the growing threat of a new crisis which the deregulation threatens, including her legislative initiatives. These include her 21st Century Glass-Steagall Act (S. 881) and Ending Too Big to Jail (S. 2544).

Political pundits insist that actions like those proposed by Kashkari and Warren, limited though they are, can never make headway under current political conditions. But as the markets’ instability increases, with a new crash clearly on the horizon, voices of sanity might just be heard.