Our Planet: One Strange Rock

Scientific inquiry was always a high priority for the proponents of the American System of Economics—from Ben Franklin and Alexander Hamilton on. I am publishing this news item in that spirit.—Nancy Spannaus 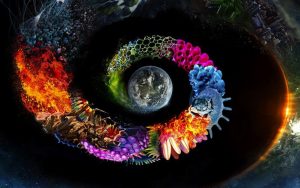 March 24, 2018 – In the early 1800s, naturalist and geographer Alexander von Humboldt set off from Europe on a voyage of exploration, to study and document the flora and fauna, the geology, and geography of Ibero-America. His travels took him to regions where no scientific eye had traveled before. The fruit of his discoveries was chronicled in his Cosmos volumes, published in 1844. With his new understanding of the relationship between the inorganic Earth and life, Humboldt had created the new science of biogeography.

Eighty years later, in 1926, Russian scientist Vladimir Vernadsky popularized the concept of the biosphere in his seminal work with that name. It was one of the first systematic attempts to encompass the characteristics of our world through the new science of biogeochemistry. But Vernadsky proposed that life is not simply coexisting with inorganic nature, but that it is transforming nature. And that mankind, different from any other life form, has the creative capability to develop and change his environment and the planet.

On Monday evening March 26, the National Geographic channel  will air the first in a series of 10 documentary films, called, “One Strange Rock.” Humboldt’s explorations were carried out on the surface of the Earth. By Vernadsky’s time, mankind had taken to the sky, at least in balloons. Now, “One Strange Rock” adds the vantage point of space, through the eyes of eight astronauts who have been there.

The series, directed by Darren Aronofsky, is a seamless knitting together of the research of scientists who are working in the field, in some of the most extreme environments for life on Earth, with the global view from the well-trained eye of astronauts aboard the International Space Station. The series is hosted by actor Will Smith, with clarity and humor. The stunning photography, taken in 45 countries and from Earth orbit, takes you to places you are unlikely to visit, but that have existential importance for the life on the planet.

Each segment has a theme, and is both educational and engaging, and appropriate across all ages. The March 26  episode addresses “what it takes to make the oxygen we breathe.” The answer will surprise you. It is not the Amazon rain forest in Brazil, that we learned is the “lungs of the Earth,” but, in large part, tiny, single-celled algae called diatoms, that are smaller than the width of a human hair. But the Amazon basin is, in fact, critical for the health of the biosphere of the planet, through the action of “atmospheric rivers,” which transport enormous quantities of water around the planet.

Each episode in the series undertakes the study of some aspect of “This Strange Rock.” And it is possible that the complex harmony that makes life possible on Earth makes it unique in the universe.