Sept. 21, 2020—The New York Times’ 1619 Project has been forced to make a significant concession in its egregious assertion that slavery was the foundation stone for the rise of the American republic. For a change, it appears that pressure from historians has had an effect. 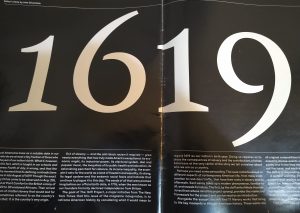 The concession came to light in a post Sept. 19 by Quillette, which describes itself as a “platform for free thought,” and is edited by a team from Australia, England, and Canada. The Quillette story was entitled “Down the 1619 Project’s Memory Hole.” It documented, complete with photos, the fact that the New York Times, and the 1619 Project’s editor Nicole Hannah-Jones, have quietly retracted the study’s leading assertion that 1619, the year a slave ship arrived at the shores of Virginia, was “our true founding” as a nation. The phrase has simply disappeared from the online version.

Indeed, Hannah-Jones has apparently recently tried to claim that she never wrote that.

My exploration online confirms that the Times did announce, back on March 11 of this year, that it had made some changes, due to the huge blowback it received about the outrageous assertion that the desire to protect slavery was a primary reason the colonists pursued the Revolution. The retraction read in part:

As my coverage of the letter by leading historians criticizing the project back in December of 2019 makes clear, this concession, important as it is, should be only the beginning. The 1619 Project is full of outrageous claims about slavery’s role in our history.

The reality is that the character of the U.S. Republic put our nation at odds with slavery from the beginning—in a world where that evil institution was widespread and accepted. This blog features two articles by historian Colin Lowry on the prerevolutionary fight. Later, American states such as Vermont, Massachusetts, and Pennsylvania were among the first states in the world to abolish slavery, and the anti-slavery movement maintained a strong fighting presence throughout our nation’s history.

I have amplified my views most fully (so far) in my post “Hamilton’s Economics Aimed to End Slavery.” While that was written to counter Ishmael Reed, a critic of Lin-Manuel Miranda’s musical, many of the arguments apply to challenging the 1619 Project as well. What I wrote there provides not only a more accurate presentation of our history, but also a strong indication of how we can proceed to deal with damage that slavery has done to our nation today.